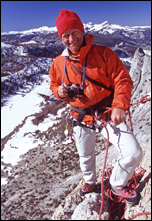 Alan Kearney grew up in the Northwest and began hiking, skiing and climbing mountains at the age of seven. During college he gained further skill on big mountains and walls in Alaska and Yosemite. In 1981, he and Bobby Knight made the fourth ascent of the Central Tower Of Paine, in Chilean Patagonia via a new route. Three years later, he and Knight made the first alpine-style ascent of Fitz Roy's 5,500-foot North Pillar in Argentine Patagonia.

Expeditions throughout the 80's and 90's took him to Pakistan, Nepal, Alaska, Patagonia and Canada. In 2000, Kearney and Brendan Cusick climbed the last major buttress on Mount Combatant in the British Columbia Coast Range. The lightweight ascent required five days, four bivouacs and 29 pitches of climbing.

Alan continues to climb, ski, run trails and backpack in his nearby North Cascades and photograph threatened wild areas in North America. He often donates images of these pristine lands to non-profit environmental organizations.

Digital slide shows with video clips featuring the Arctic National Wildlife Refuge, global warming, and desert towers and peaks are available. Shows of climbing adventures in Patagonia, Alaska, the Himalaya, and the Alps are also available. Inquire about rates and availability.